Those of you that know me well are aware that over the past couple of years i’ve tried out pretty much every fitness tracking device going! I’ve tried out the Nike fuelband, Jawbone, FitBit (both the Flex and the Charge models!), Apple Watch and now I have the Garmin Vivoactive … and even now I still haven’t found one I’m 100% happy with! Why it is so difficult ??!! Maybe i’m just too fussy!

The Garmin Vivoactive finally has everything I wanted, day-to-day tracking, GPS built-in, notifications from my phone, silent alarm and good battery life – overall I love the functionality the only thing I am disappointed with is the look as even with the white strap it’s still seems quite “manly”, it’s fairly large/chunky (although very light!) and just seems generally too large to wear day-to-day. Although since this is the only device i’ve actually found what I wanted, I do wear it! I wonder whether Garmin will bring out one a little smaller? 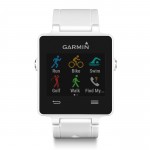 The Jawbone was probably the most unreliable, I had 3 and all of them broke within a few months, maybe I’m just a heavy user but the others devices have been fine with the same usage! I did like the app though, it was very easy to use and there was much more detailed insight into sleep patterns than some of the others. I liked the Nike fuelband, I loved how it used ‘fuel’ as a measurement rather than number of steps as everyone has different fitness levels it was a much fairer way to compare against friends etc. The app was great too!

My favorite non-GPS was definitely the FitBit, I liked how it had a lot more social interactions and engagement (mainly because of its popularity a lot more of my friends were on it!) I liked the mini competitions you could have with others, it was a great motivator to get to the top of the leaderboard! It had relatively good battery life (around 7 days), the FitBit Charge had a button on the slide which came off but overall the wearability of it FitBit was good. It’s a real shame that the FitBit Surge (the one with built in GPS) is so ugly.. It’s absolutely massive and looks horrible! otherwise it could have been a good contender!

I was most disappointed with the Apple Watch (what you get for the price!), the day-to-day activity tracking was good (I liked how it had 3 separate goals and it wasn’t focused on steps but more aimed at your personal fitness) but it was terrible for tracking my runs (maybe just because I had the first version), obviously you need your phone with you as it has no GPS so it’s obviously trying to communicate with your phone and for me this was an awful experience. I crashed more than it worked and most annoyingly for me was when i hit “start” it took so long to respond I often didn’t know whether it has started or not so i’d hit start again and this would sometimes stop it without me realizing! I failed to track my runs more than it actually worked! There were other attributes I was disappointed with but I wont bore everyone here!

At the moment I have settled on the Vivoactive, the main reason being that I am a runner. I’ve had a Garmin (Forerunner 110) for a few years and it’s never failed on me, it’s easy to use and just works! So I decided to give the Vivoactive a go and i’ve not been disappointed!