By samcooper11 Monday, September 21, 2009 0 Life, Travel Permalink 0
¬†
The first weekend in September I went Sea Kayaking with the Lilly social club! Had a great weekend and would certainly be up for trying it again one day! (Even though I was pretty rubbish at it :p )
¬†
We had a nice early start in Illfracombe on the Sat so we drove down to Barnstable on the Friday evening and stayed in a travel lodge which happened to be at a random service station but hey least it was a proper bed unlike Sat night’s wild camping!!
¬† 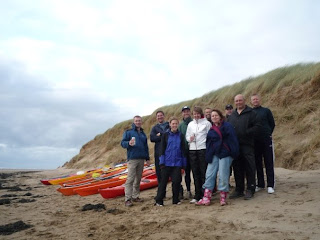 So as soon as we started Sat morning I was already scared lol – they were talking about huge waves and scary winds! But we ended up started on a nice calm estuary and good job we did as I was useless! We stuffed all of our clothes and camping equipment into the boats and wow they were heavy!!! Then we were off! unfortunately we didn’t really get any instructions on what we needed to do, we were just left to it! I had to get rescued by the instructor many times on the first day! At first I just couldn’t get the hang of steering.

¬†
In the afternoon we “braved” it and went out to sea – the guys went pretty far out but the girls hung back a bit and gave up after a few bigger waves :p (I was wet right through and starting to get cold!) Nicola & I had an amusing time attempting to get out of our boats on the sand edge with waves crashing over us!! All part of the fun! We then set up camp on the edge of a random beach! I’ve not done wild camping before so was interesting 😉 lol. We made a huge fire, made home-made break & drank wine 🙂 Our instructor didnt even have a tent he just slept in his sleeping bag next to the fire!
¬†
Had a nice 6am start on the Sunday as we needed to Kayak back down the coast before the tide came in (Although we didn’t make it in time and it was a lot of HARD work! – My arms were aching a lot by then) luckily I had finally got the hang of what I was meant to be doing and so was a little more confident that morning! We then stopped on a beach for some yummy cooked breakfast (well needed – esp for those hungover 😉 hehe)
¬†
The sunday afternoon was prob may fav bit of the kayaking, we went to another beach and kayaks along the coast through lots of rocks, although did get a bit scary when someone capsized due to huge wave!) Was some great views and the sea wasn’t too scary that afternoon. We finished around 4pm ish and we recovered with a nice cream tea (no we aren’t old folk :p )
¬†
Really was a great weekend and I managed to survive without capsizing!!! 🙂